The IT industry is constantly evolving. The Internet has given IT trends like cloud computing, BYOD and IoT adaptive advantage over previous insular methods of connection, with business-critical applications and IT services hosted remotely and accessible 24/7 on an endless array of devices in an endless number of locations. These adaptable trends survive because they are the fittest, but is network security evolving at the same pace?

Ethics has never played the greatest role in the process of evolution and the IT industry is no exception. Information is the newest global business currency and sensitive data like financial information and confidential corporate information is understandably the target of coevolving corrosive elements like defacement, ransomware and malware.

The security market has responded with many granular security solutions but less than 40% of enterprises have progressed to Next Generation Firewall protection methods. Those organizations who are protected by Firewall or IPS often neglect to evolve their security protection into the realm of Web Application Firewall or more comprehensive and proactive methods of protection. WAF and deep-learning security components are often seen as an additional investment with few monetary benefits, while the protection offered by NGFW & IPS is becoming too general and reactive with the increasing number of evolving web vulnerabilities.

In 2017, a new variation of ransomware called WannaCry infected more than 99 countries, attacking governments, schools, hospitals, and other industries. It was this incident that made ransomware well-known to the public.

Ransomware is a malicious software that cyber-criminals use to hold your files (or computer) for ransom and requiring you to pay a certain amount of money to get them back by encrypting your files. Since its been discovered, Ransomware has been growing at a tremendous speed with more and more users being infected, both companies and consumers. This is critically aecting the productivity & reputation of many companies, which many of them are paying in the end.

More and more varients are now being spread such as XBash, which are focus on data system destruction and crypto currency mining. Application security is no longer optional. Between increasing attacks and regulatory pressures, organizations must establish effective processes and capabilities for securing their applications and APIs (source: OWASP, 2017). With risk awareness & cost concerns delaying the evolution of true organizational security, many businesses are simply taking what’s offered with no consideration given to (or no idea of) true needs.

Neural-X is at the center of a sophisticated web of Sangfor developed network security elements. As a cloud-based intelligence and analytic platform powered by Artificial Intelligence (AI), Neural-X powers and expands security detection capabilities for Sangfor’s network, endpoint, and security-as-a-service offerings.

Neural-X contains dozens of interconnected components designed to work together seamlessly to keep your system both safe and secure including engine zero, threat intelligence, deep learning, sandboxing and botnet detection.

Network Security has not experienced an equal evolution in all verticals – security experts have differing opinions, expectations and needs across different sectors and different locations. While some define network security as protection against unauthorized access to files and data, others focus on firewall, anti-virus and botnet detection. Traditional security solutions have limited visibility of users, traffic and IT assets with no real-time or post-event detection capabilities. With increasing attacks on the application layer, network security needs to evolve further to keep up with emerging threats.

Sangfor Technologies has a new concept of network security to counter new and more dangerous threats. We go further to provide a complete protection solution for all users against all threats, internal or external, existing or future. Sangfor’s evolutionary adaptation of network security follows 4 fundamental points which form the core of our market strategy: 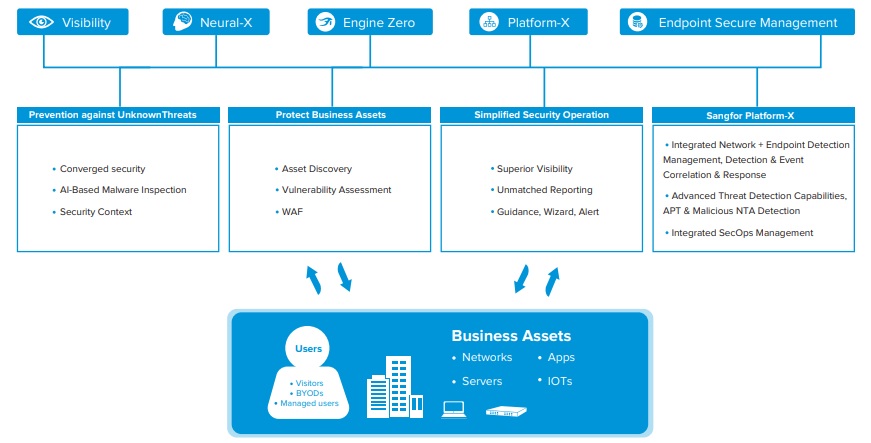 Sangfor NGAF uses its own Cloud Sandbox to help users isolate potential emerging & new threats that haven’ t been included in any security database, which is especially useful against 0-day attacks.

The human element is still one of the weakest elements in any organization security operation team. With thousands of logs, it is almost impossible to go through each one of them. This is why many NGFW will filter all logs and only shows the ones with the highest level of importance. However even with this, it is still possible to make errors.

That is why Sangfor is now going further and has implemented artificial intelligence in all of its security innovations, such as malware detection “Engine Zero”, Next generation WAF and new Botnet detection engines.

All these engines are sharing the same threat intelligence, which is provided by Sangfor cloud-based Neural-X platform. Using machine learning, it can detect the new unknown threat without any existing signature in advance and prevent any harms to your organization.

If Sangfor NGAF detects an unusual outbound connection on a server connected to the internet, it sends the suspicious DNS address to Neural-X for verification. If threat intelligence has classified this particular DNS as a known C&C server, it’ s likely the server has been compromised. NGAF can be programmed to block these C&C communications so no further damage can be caused and to also send alerts to firewall operators for further investigation and processing.

Traditional detection technologies mainly include MD5, virus signatures, rule matching, virtual execution and sandbox. In theory, their detection ability becomes stronger from MD5 to sandbox, with the performance decreasing and cost increasing. Compared to these traditional technologies, Engine Zero has the following advantages:

Sangfor NGAF is good at discovering and protecting business assets. Sangfor NGAF can automatically discover your organization’ IT assets, discover the system vulnerabilities in real-time, and continuously protect the IT assets.

Moreover, with its proactive protection, Sangfor NGAF is capable of applying virtual patching, identify weak passwords, and hidden applications in all IT assets.

With its Next Generation WAF engine, which use learning and semantic analysis, will help to protect against the most common attacks such as webshell, struts2 injection, and deserialization flaws. It can also learn to analyze the attacks and the attack behaviors. It’ ll enhance the detection rate and decrease the false positive of the traditional SNORT based detection engine. With the modeling of the attack behaviors, the threat model will be created for customers to easy manage the application system threats.

Even small or mid-sized organization without a specialized IT security team often receive thousands of alerts per week, requiring the IT department to dedicate man-hours to investigation and analysis, and increasing operational costs. The IT nightmare is just beginning, as they are now responsible for limiting downtime, identifying the root cause and taking action to mitigate damages and prevent future attack from the same source. Those organizations still using traditional security solutions without any intelligent or automated reporting tools are at a severe disadvantage. Without 360° visibility and clear analytics and reports, effective security becomes exponentially more difficult.

Sangfor NGAF simplifies daily security operations by helping to identify real and risky security events among thousands of alerts and providing guidance and suggestions for the best solution.

These expansive visibility components allow the IT department and business owners to execute proactive checks of their system online or offline, thus providing a secure environment for all business systems.

Security is growing increasingly complex with malicious trac intermingling with legitimate trac and authorized users both at risk of attack and (knowingly or unknowingly) a potential risk to the network. Sangfor believes that visibility of the entire network is the foundation of solid network management. Administrators need to clearly see and understand all risks to information assets and track users and behaviours in order to recognize security threats and eliminate them in a timely manner.

Data and statistics on past and current threats is vital, but there is also a need for further analysis of the correlation between users, behaviours and business systems. By evolving security into a 360 view of the network, users can gain a better understanding of where the attack originated, the attack process, repair any damage and proactively defend against further attacks.

Sangfor NGAF Reporting Tools give our customers an extensive overview of their network with just a few clicks. Information like online user identity, server or abnormal trac and attack status and source are just a few of the visibility resources provided.

Neural-X is at the core of NGAF intelligent threat detection and defence. Neural-X uses deep learning and in-depth analysis of vector association to detect domain names used by malware of similar families. The deep learning function is designed to operate and learn independently – thus maintaining a proactive, innovative and highly visible approach to malware detection, identification and elimination.

Intelligence is the key to visibility and Sangfor NGAF and Neural-X aim to provide a wholistic view of the network with comprehensive visibility from endpoints to business systems.